At the heart of the long-term livelihood change project is the question ‘is Tanzania’s growing national economic prosperity visible in its rural areas?’. If ever there was an archetypal place to seek answers to this question, it would be the village of Mtowisa, down in the Rift Valley, close to Lake Rukwa in Rukwa region (southwest Tanzania), where I lived there for almost a year between 1999 and 2000 as part of a post-doctoral research fellowship. The village is not far, as the crow flies, from the regional capital of Sumbawanga, which is barely 15km away. But the flying crow has an easier route than humans, as it can soar over the 1200m escarpment that separated the town from the village. Residents had to walk between the two, else brave a long and difficult journey on bad roads. This was a village that felt far from anywhere, where most people were small-scale farmers, cultivating 2 acres or so. Only 20% of families owned cattle and then but small herds. Most lived in simple grass-rooved houses. Mtowisa in 2000, had not really been touched by 10 years of economic growth that had already occurred in Tanzania – how has it fared in the 16 years of strong economic growth between 2000 and now?

I returned to Mtowisa in August 2016 interviewing 64 domestic units, local shopkeepers and government officials, travelling to neighbouring villages and fishing camps with friends, visiting new irrigation schemes and holding two village meetings (for women and men). Revisiting the place was a wonderful experience. All through the visit I had people complaining that I was not coming to their house to do the survey: ‘njoo uniandikie mimi pia’, (come and write about me, too) was a common refrain (only one person refused to take part). It was unusual to have to think up reasons why I could not do so. I’m afraid my Swahili was not up to explaining the importance of a random sample.

At first sight the changes to the village appeared remarkable. Transport to the place is much improved with year round bus-services. The village centre was transformed. I had known it as a sleepy place with one major shop and a small hospital, where cars came infrequently, and motorbikes were rare. Now there were numerous shops, nearly 20 bodaboda (motorcycle taxis), gas and electric welding (the latter run on a powerful generator), several phone shops and a well-equipped hardware store. The hospital had an operating theatre and there were lots of solar powered lights (and stereos, making the place a much louder one at night). There is a large phone tower in the village (since 2008). 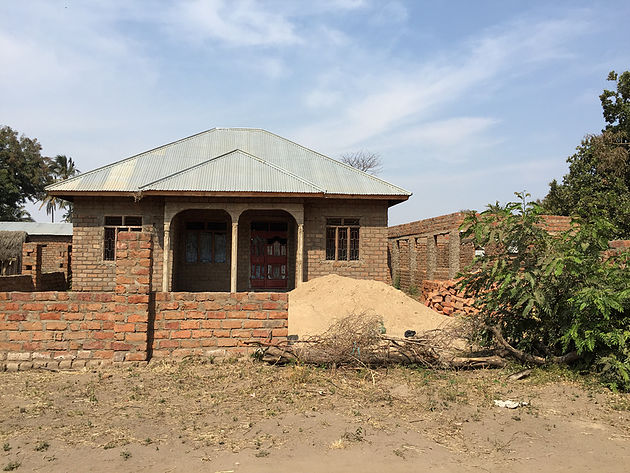 There was an abundance of metal roofed homes, and many single rooms being rented. Numerous pigs roamed the streets or were kept in small compounds near people’s houses (these had also been unusual in 2000). The small irrigation furrows I had left behind were still present, and indeed had expanded in number. In the dry season they were used (since about 2012) to cultivate tomatoes, cabbage and onions and there were around 10 petrol powered pumps which withdrew river water to pump to near by farms.

But the presence of these changes, does not answer the question posed above. What matters is how this apparent wealth and new business had affected the lives of the poorer farmers of Mtowisa. Were these changes welcome to them? Did them benefit from them?

To explore this I drew upon a survey of 800 plus domestic units I had conducted in 2000. I selected 64 units to revisit and compared their asset ownership to their state in 2000, and to the asset ownership of domestic units with similarly aged heads in 2000. My original survey did not include many wealthy Sukuma immigrants, and the new sample included no domestic unit heads below 35 years old. But it still provides useful insights into the condition of older domestic units.

The differences can be very simply stated. Older families in Mtowisa now enjoy higher levels of prosperity, as measured in assets, than they did 16 years ago. They enjoy higher levels of prosperity than their counterparts of an equivalent age expected to achieve in 2000. They are wealthier because of their farming, and, in particular because they are selling more cash crops, specifically sunflower seeds and sesame, with the latter providing the most substantial change.

The evidence for this change is as follows. First, with respect to key measures of herd and plough ownership the sample visited is wealthier than it was in the past, and compared to the group of similar aged domestic unit heads in 2000 (see Table 1). Oxen ownership has increased by half (and if we include oxen borrowed from wealthy Sukuma patrons it doubles to 41%). Pig ownership has increased dramatically, and ownership of ploughs has more than doubled.

Second, with respect to farming activity, people are simply farming more. They are farming larger areas than they were previously, with fewer 2 acre farms in particular and more farms over 5 acres. Younger families (of those over 35) are more industrious than they were previously. All families are farming more cash crops, with proportionally less maize is grown than before. The decline in the proportion of maize is due to more farming of sunflowers and sesame. Third, housing quality has improved, particularly with the spread of metal roofing, as these pictures show.

These depict houses in 2003, 2010 and 2013 with houses built in the interval between the photos ringed in blue and yellow respectively. 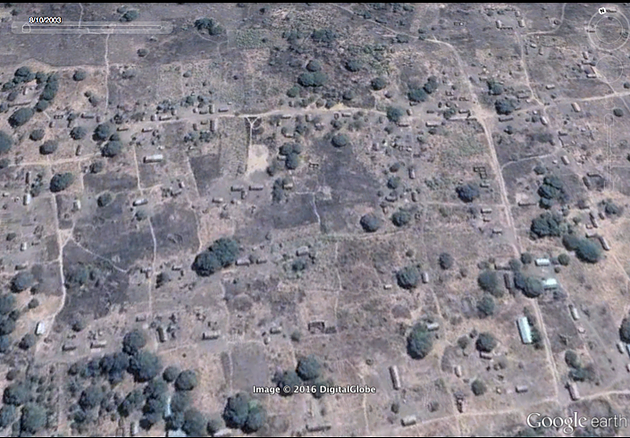 The other source of evidence on housing change are the narratives that I was told repeatedly by many people: that they had been able to invest in their houses because of their farming activity. It is a very simple story, but no less heartening for that. The narratives demonstrates when the changes in people’s homes and other assets occurred and why. Figure 1 shows what people were purchasing, and when.

This figure demonstrates that the scale of the investments are considerable, if quite recent. The main reason for that growth in investment, as shows, is the increased sales of sesame and sunflower seeds.

After 2010 farmers were able to yield fantastic returns, of, I was told, between 250,000/= and 300,000/= per sack of sesame. This is more than enough for a roll of metal roofing, and only two rolls would be required to roof a standard sized house. One story illustrates well the joy and surprise that these returns caused to farmers in Mtowisa. I was told that one farmer (we will call him Darius), who I met in the survey work and who had not been particularly industrious or wealthy in 2000, went up to Sumbawanga to sell his sesame in 2011. This was a collective enterprise, with many farmers loading their harvest onto the lorry of the local shop owner to take it to the depot in Sumbawanga where better prices can be realized. On receiving his payment for two sacks of sesame (500,000/=) Darius was simply left shock (amekaa bubuwazi). He sat down in a corner of the weighing room, still full of the hustle and bustle of heavy sacks being moved, weighed and paid for, because he had never in his life expected to have so much money. His friends had to guide him to a guest house where he could safely spend the night. The next day he had recovered sufficiently to buy metal sheets for a new house (which are also much less easily stolen than money). He built a new house that year and extended it the year after following further sales. It is because of repeated stories like Darius’ that the appearance of Mtowisa, and the daily lives of so many of its residents have been so thoroughly changed. Higher sesame seed prices have given a substantial cash injection to many people’s livelihoods.

Altogether 66% of the sample had experienced an increase in assets in some way over the previous 16 years – but what subtler changes does this bald statistic conceal? There are two general trends to note. First, the improvement in assets is general across most wealth groups, but richer, more industrious families, have tended to be able to benefit from the cash crop returns more than families who were poorer and farming less in 2000.

Older people, female headed domestic units, and smaller families tended to improve their asset base less than younger, male-headed, larger units. This trend reflects changes in the lifecycle of domestic units where older people farm less, where widows also farm less, and where both tend to support fewer dependents.  This means that, had the sample been more representative of village society, and had fewer older people and fewer domestic units headed by widows then it is likely to have had more instances of successful asset growth.

Nonetheless the general conclusion from these trends is that, within the constraints of age and senescence, the injection of resources that the recent cash crop boom has provided has been remarkably catholic. Access to this resource was not restricted to existing asset rich households (although an existing asset base clearly helped). Any family able to manage its affairs wisely, and enjoying a modicum of good luck, was able to benefit.

Finally, it bears repeating that assets are but one aspect of prosperity. The families I visited, in the main, had enjoyed a recent cash injection from which they had invested in assets. But there are many other dimensions of poverty that remain untouched by this welcome change. The standards and ease of accessing health and educational services, care for the long term sick and elderly, basic measures of dignity and so on are all ignored by this survey. Our methods and sources do not allow us to make the long term comparisons required to document the changes (or lack thereof) that have occurred here. But that does not make them any less important.

Answering the Question: the national economy and rural prosperity

But how do these changes answer the original question with which we began? To what extent are rural areas benefitting from economic growth in the nation as a whole? The answer in the case of Mtowisa, is rather ambiguous. The direct connections between economic growth and local changes in prosperity are surprisingly hard to demonstrate.

Some of the changes that took place here do not seem to depend on changes to transport provision and road quality. The sesame seed price rise took place some time after the local road had been completed, and before the metalled road between Mbeya and Sumbawanga had been built. Many of the assets (land, burned bricks, timber for rooves and oxen) can be locally sourced. Moreover the continued lack of provision of key services that are the state’s responsibility (water, TASAF social security payments for the elderly and extremely poor) mean that despite the state’s growing prosperity residents of Mtowisa remain as disadvantaged as ever.

Other aspects of the changes are likely to be connected to national economic change. The availability of metal roofing sheets and ploughs, and the price of some crops will reflect national change. But it is unlikely that these are well connected to the sectors which have, apparently, been driving Tanzanian economic growth in recent years.

But if this has been a case of separate development it is likely that, in the future, the fortunes of this village will be tied to the country’s more powerfully than before. Agricultural activity will continue to intensify. The changes in Mtowisa between 2000 and 2016 have been dramatic, and most of them are less than five years old. They are nothing, however, to those that are about to unfold over the next ten as this once remote village becomes increasingly integrated into the national economy.