Posted on January 8, 2020 by Dan Brockington

What do changing patterns in charities’ declared purpose and geography of activity tell us about the health of charities working on international development? In the records of the Charity Commission, charities describe their purposes according to a fixed number of categories. One of these is ‘overseas aid / famine relief’. The graph below shows a decided and dramatic decline in the registration of charities with that label. In the 2000s thousands of new organisations were established to support that cause. But, since 2012 enthusiasm for new charities with that purpose has waned. Only 25 (!) new organisations reported that purpose in 2017, and less than 10 in 2018. And yet more charities are being established each year now than ever.

The beginning of the end? 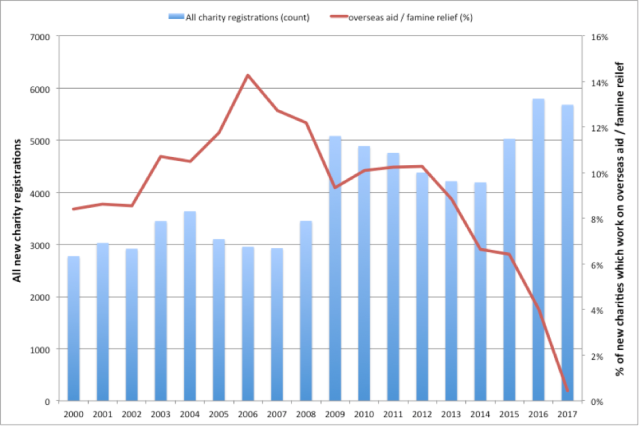 How do you respond to a graph like this? We suspect that a number of readers will think that this graph indicates that the development NGO sector is in decline. What had once been a vibrant cause stimulating new charity establishment has virtually disappeared. For these readers this graph captures a wider insularity across the country that is reflected in Brexit and the increasingly hostile environment to development aid.

But that conclusion would be hasty and quite possibly just wrong. These results surprised us, but they do not challenge the main conclusions that are emerging from our research project into the changing trends and fortunes of the development NGO sector in the UK. That work shows the development NGO sector is growing and thriving (both in number and finances), that the public is the mainstay of growth, and that public financial support is growing even as available household income is declining.

Instead this trend more likely indicates that the development sector, and especially its new entrants, are not well characterised by the ‘overseas aid / famine relief’ label. An education charity working in Tanzania will be doing development work – but may chose the label ‘education’ rather than ‘overseas aid’. Our database of nearly 830 development NGOs registered with the Charity Commission includes 320 who do not describe themselves as working on ‘overseas aid/famine relief’. Almost 70% of these were established since the millennium. The labelling has moved on.

So too has the marketing. It is possible that the development sector is thriving because it is re-inventing itself as a whole series of new, more specialist organisations. These new charities do not do ‘overseas aid’ generally, but, for example, combat malaria, or the abuses of children homes, or promote ‘the girl effect’. One reason behind the success of the sector may be its repositioning of its causes, the appeal of these to new audiences, and associated investment in the fundraising and branding. This in turn fits with a more general shift of development: it is less about aid to poor countries, and more a series of interlinked global challenges, as the SDGs demonstrates.

Moreover new charities are more ambitious geographically. Charity Commission records show that in the first five years of the millennium the average number of countries charities worked in overseas was 4.5. Since 2015 it is over 9.3. The turn away from ‘overseas poverty and famine relief’ does not signal a more general insularity.

But it is important to understand what lies behind these trends. The people who set up new charities are some of the most active members, the core if you will, of the ‘civic core’ that underpins the charitable sector in this country. There was something interesting going on in the mid-2000s in the minds of this group: a clear and determined shift from new charities which had a UK-only focus, to more concern for poorer countries (as the graph below shows). We realise this may be a sore point (for reasons clear here and here), but perhaps this was a consequence of ‘Make Poverty History’? After the financial crash that trend reversed, but we still have a situation in which more charities focussed only on DAC listed countries are being established now than at the start of the millennium. Even if no more charities are set up to pursue ‘overseas aid or famine relief’, we contend that there are still hundreds of charities being established that will sustain the development NGO sector in the future and lead it in new directions. As our work proceeds, we look forward to understanding how trends in new organisations shape the sector as a whole.

The changing configuration of international interest in new NGOs

Researcher at the University of Sheffield
View all posts by Dan Brockington →
This entry was posted in Uncategorized. Bookmark the permalink.